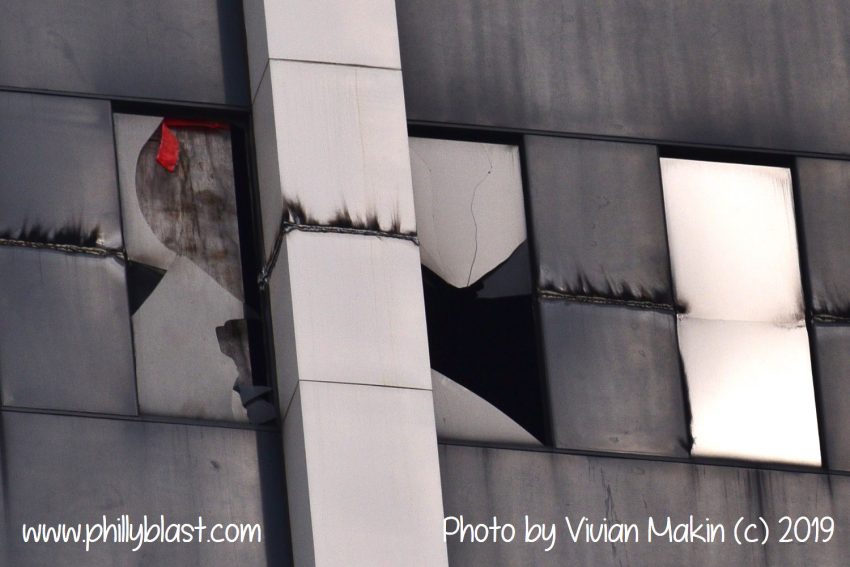 Throughout the month of February 2019, several horizontal cuts have been made in a few of the upper floors of Martin Tower. Visible from street level, the burn marks fully extend through the 17th floor on all four sides. The east face of the building – on the opposite side as 8th Avenue – additional cuts can be seen on the 16th floor. While I was there with my camera, new cuts were being made to the 13th floor. Close-up photos taken from the sidewalks along Eaton and 8th Avenues show the visible progress.

As of early March, there is no official word to confirm whether or not Martin Tower will be demolished by implosion. The cuts being made to the building seem to be strong evidence consistent with preparations for implosion. It’s likely that the location of these cuts could be “give-points” to assist the building coming down in a controlled manner.

To get final demolition permits for Martin Tower, site owners Lewis Ronca and Norton Herrick must submit a master development plan to the City of Bethlehem.

Phillyblast will continue monitoring visible progress on the building as well as any information in the local media regarding details of the future activities at the site.

WFMZ-TV has an article with statements from Bethlehem’s Mayor Donchez.
An article also published by The Morning Call on 7 March 2019 has begun confirmation of implosion plans and sets April as a target time-frame.