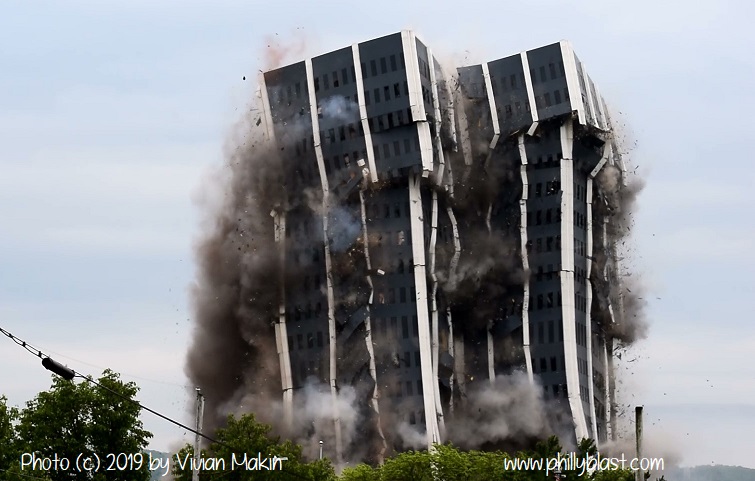 After months of build-up and anticipation, Bethlehem’s Martin Tower was blasted into the history books this morning. It took only seconds to reduce the Lehigh Valley’s tallest building to rubble.

Preparation work for Martin Tower’s implosion has been underway for months with Maryland’s Controlled Demolition, Inc. serving as the blaster under the general contractor L&M, Inc. The implosion went exactly as planned, with the 21-story tower falling within its own footprint.

Crowds turned out to watch the implosion from every direction. Popular viewing spots included the Illick’s Mill ballfields, Bethlehem’s Rose Garden, and the South Mountain lookout. Vivian and I had to make last-minute changes to our viewing spots, but it worked out well for both of us. I watched from Genoa Street and 12th Avenue just above the B Braun parking lot, while Vivian got a great spot at Bradford Street and 8th Avenue.

It has been 15 years since Vivian and I have attended an implosion, and so much has changed in that time. All of our photography and videography is digital now, and we get to share our adventures with you on our YouTube channel as well as on this site. For the first time ever, we have 5 camera views of the demolition as well as the festivities before the blast and the aftermath it left behind.

Although Phillyblast has always been a team effort, most of the credit for filming and editing this video goes to Vivian. We hope you will enjoy today’s video along with others we have been sharing on Phillyblast’s YouTube Channel.

Now that the 332 foot tall former headquarters of Bethlehem Steel has fallen, Allentown’s PPL building once again reigns the Lehigh Valley’s tallest building. In a few months time, all of Martin Tower’s rubble will be gone to make way for a new mixed-use development, but our memories, photos, and videos will remain.

Thank you for sharing the journey with us as we have chronicled Martin Tower’s demolition. Although today’s events were exciting for us, we are also feeling a lot of sadness at this great building’s demise.

This implosion has been our catalyst for rebuilding Phillyblast, and that’s an effort we intend to continue. We will be bringing our old content into the new site, and hopefully adding new features along the way. We don’t know when or where the next area implosion will be, but you can count on us to be there when we find out.